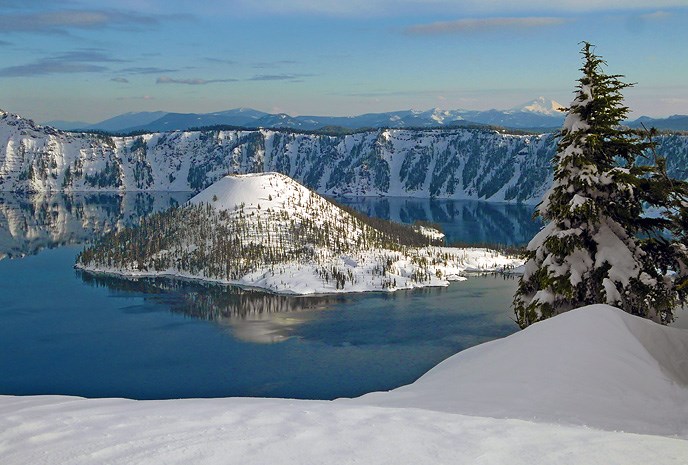 Even though the weather remains wet and cold, the fun doesn’t stop in Oregon during the winter months. As the Midwest and Northeast continue to get hit by massive snow storms and freezing temperatures, those of us on the West Coast have plenty of opportunities to pull out our umbrellas and enjoy what the season brings.

When making your Oregon travel plans for this February, keep in mind the following activities for your next RV adventure.

Each winter, Crater Lake receives an average of 43 feet of snow. Ranger guided hikes make an excellent opportunity to explore this beautiful national park, and learn firsthand how the plants and animals surrounding the caldera survive during the coldest time of the year.

This hike is open to all participants 8 years and older, and no previous snowshoe experience is required. The park services department will have snowshoes on hand you can use for free, although a $15 fee does apply to enter the park. The tour itself is also free. Space is limited, so make sure to reserve your spot in advance.

The performance will also include an original routine from Ice Dance International, along with a solo performance by lead choreographer Erin Reed. Tickets to this event range between $11 and $44 dollars, depending on seat location.

The U.S.’s oldest West Coast birding festival marks a celebration of the return of waterfowl and Bald Eagles as these majestic animals continue their winter migration. Bald Eagles are among some of the most exciting birds on display during the four-day festival. This year’s festival will include several keynote speakers, as well as a variety of workshops, presentations, and tips on winter birdwatching.

While Bald Eagles highlight the plumage on display, the Klamath Falls basin is also a prime habitat for many other species of raptors, and well as a stunning number of diverse waterfowl. This marks the festival’s 40th anniversary, and certain events and guided tours are certain to fill up quickly.

Celebrate the 160th anniversary of Oregon becoming the nation’s 33rd state. This festive event will pay homage to Oregon’s rich history of explorers and settlers coming to the region with costumed reenactors, covered wagons, blacksmiths, and a number of live musical performances. Activities for the whole family coupled with free birthday cakes makes this an informative and fun way to learn about Oregon’s history.

This year’s annual comic con offers fans the chance to meet some of their favorite actors, artists, and writers from the world of comics, science fiction, and fantasy. Some of the most notable celebrities appearing include Aquaman star Jason Mamoa, star of the CW series Supergirl Melissa Benoist, and many of the cast members of the classic series Buffy the Vampire Slayer.

Wizard World celebrates the best in pop culture, and is brought to you by some of the toy, comic, television, film and publishing industries best. Single day and all access passes are available, along with VIP tickets that can get you a chance to personally meet one of your favorite stars.